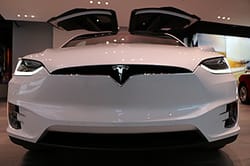 We have updated our Tesla (NASDAQ:TSLA) Earnings & Valuation Model to include today’s results. The following is a summary of the new guidance management gave on tonight’s call and the key changes we made to our earnings model. Keep in mind, we try to keep the assumptions in our models constant, and change only the line items where management has given specific guidance; However, Tesla's results change rapidly so there is greater variation in this model compared to the other companies we cover.

Summary of Earnings Model Adjustments
We have incorporated the guidance above into our earnings model. Here are some of the key items we considered in our updates:

1) Average Selling Price: Based on today’s results it appears our Average Selling Price (ASP) estimates ahead of the release were a bit too high. Management did not disclose the 4Q15 ASP for the Model S and X; However, this metric is important for our future period forecasts so we attempted to estimate the ASP based on the following:
2) Gross Margin: Management guided Model S margin to approach 30% by the end of 2016 and Model X to be about 25%. On the call they said they hope to exceed 30% gross margin on both vehicles within 18 months. In our earnings model we assumed both Model X and Model S reach 30% gross margin by the end of 2018. We also assumed that it would take some time for the year-end 2016 target to be reflected in the full quarter results.

Management’s New Guidance
EPS & Valuation Including Tonight’s Results
Our Tesla model is a Tier 1 model, so we value shares using two approaches: 1) a market multiple approach, and 2) a Discounted Cash Flow (DCF) valuation, and then weight each by 50%.